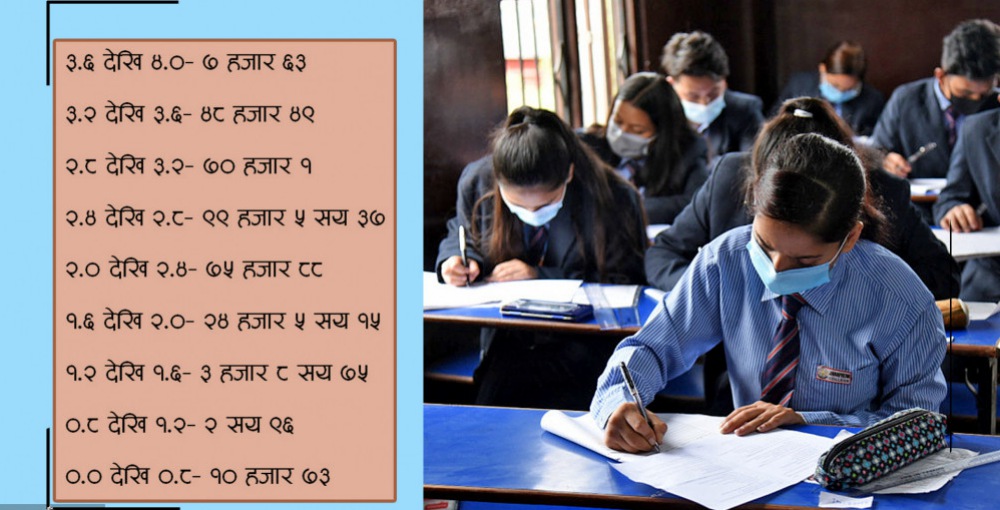 The National Examination Board has made public the results of class 12 examination on Friday. According to Durga Prasad Aryal, member secretary of the board, the results of 374,015 regular, part-time and part-time examinations have been published.
On the regular side, 338,688 students participated in the examination. Out of them, the number of candidates getting 3.6 to 4.0 GPA is 7,063. An examination center was set up at the school where the students were studying due to the Kovid epidemic and the board has tested the answer scripts. Last year, the number of students bringing higher GPA increased when the school itself tested the answer scripts. Aryal said that the number has decreased compared to last year.

There were 28,466 candidates for grade promotion. In part, 6,861 students have appeared for the exam. Their results have also been made public. Out of the total candidates, 46 have been expelled for acting against dignity, the board said.

Four fake examinees and two tiktok makers have also been punished. Aryal said that the Ministry of Education has been recommended for further departmental action including action against the head of the examination center and the inspector. A board meeting on Friday morning decided to make the results public. The exam was postponed twice because of Corona. The class 12 examination was conducted from 30th September to 8th September. Before that, the examination which was supposed to be held from 31st of July was postponed for the second time on 23rd of July.