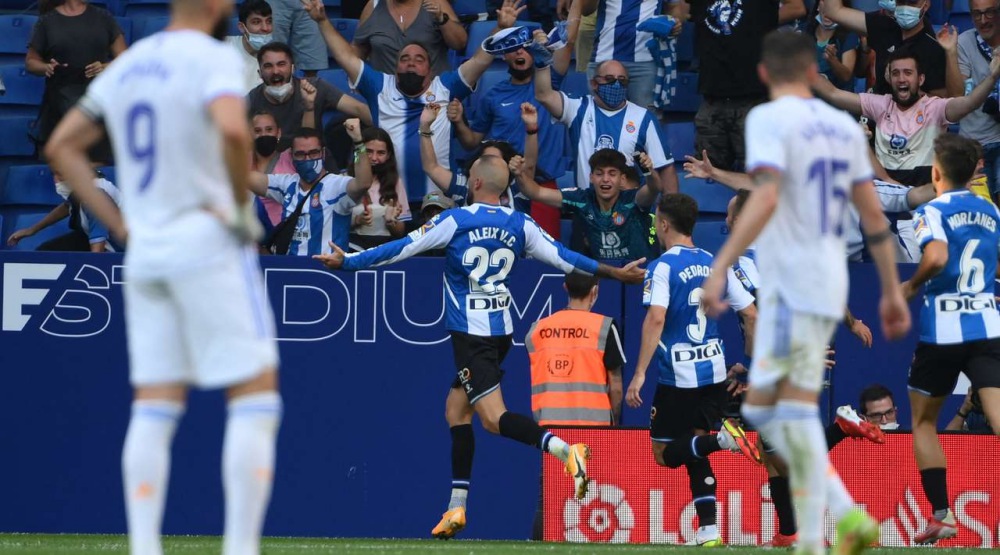 Both Real Madrid and FC Barcelona go into the international break with problems after they both suffered defeats in La Liga over the weekend.

Raul de Tomas’ near-post finish and Aleix Vidal’s excellent individual goal put Espanyol 2-0 up. Karim Benzema gave Madrid hope with his ninth goal of the season in the 71st minute but there were to be no further goals.

The defeat follows a goalless draw against Villarreal and a shock Champions League loss to Sheriff Tiraspol, and means Real Madrid coach Carlo Ancelotti faces a difficult couple of weeks.

Ronald Koeman is clinging on to his job at FC Barcelona after his side suffered a painful defeat away to Atletico Madrid on Saturday night.

Former Barca striker Luis Suarez was Koeman’s tormenter-in-chief, setting up Thomas Lemar for Atletico’s opener midway through the first half and then doubling their lead just before half-time as Barca made significant errors in defense.

Barca never really looked like getting back on level terms, despite Ansu Fati being brought into the action midway through the second half, although surprise declarations from Barca president Joan Laporta look to have assured Koeman’s short-term future when many expected him to be sacked.

Villarreal’s season continues to build thanks to a 2-0 win at home to Real Betis thanks to two goals from Dutch winger Arnaut Danjuma, who put his side ahead on the stroke of half-time and confirmed the win with his second of the game with 20 minutes left to play.

Real Sociedad are third in the table, level on points with Atletico and Real Madrid, but missed the chance to go top after drawing 1-1 at home to Getafe, who took their first point of the season thanks to Sandro Ramirez’s first-half goal, which was canceled out by Mikel Oyarzabal’s 68th minute goal.

Sevilla missed the chance to move level with Real Madrid, Atletico and Real Sociedad when they lost 1-0 away to struggling Granada. Ruben Rochina’s powerful 24th minute shot and a series of saves from Granada keeper Luis Maximiano helped Robert Moreno’s side to their first win of the season and probably saved the coach’s job, at least for the short term.

Sevilla ended up with 10 men after Diego Carlos was sent off for using his elbow on Granada striker Luis Suarez.

Angel’s 74th minute goal got Real Mallorca back to winning ways at the expense of Levante, who have still to win this campaign.

Cadiz coach Alvaro Cervera left out seven first-team players who had gone partying after last weekend’s defeat to Rayo Vallecano, and his much-changed side held on for a 0-0 draw at home to Valencia.

Valencia dominated the game with 68 percent possession and 16 shots against just two from Cadiz, but were unable to stop their run of games without a win extending to four.

Bernadetto’s goal early in the second half got Elche back on track with a 1-0 win at home to Celta Vigo, who saw how Iago Aspas’s goal in the last minute ruled out for handball.

Garcia had earlier seen a penalty saved, but was in the right place to nod home Inigo Lekue’s header on the stroke of half-time.

Suarez brace lifts Atletico back to top of La Liga
Published at September 22, 2021, 9:46 am by Xinhua in Main News Category